It is the richest section of the museum which includes 520 collections. The Literary Manuscript Section (Dzeragratun) is especially wealthy where 362536 museum objects are kept at present days. The above mentioned Sayat-Nova’s autograph Davtar (note-book) of songs created in 1750-s is the oldest one. The archival memorials brought by the founder of the museum Y. Shahaziz have been completed with manuscripts of both East Armenian and West Armenian writers as well as writers Soviet period and Diaspora of late time. 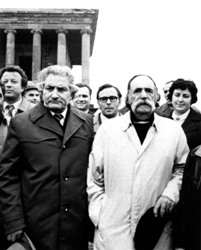 The founder of New Armenian literature, the great enlightener Kh. Abovyan’s collection is very valuable. Besides his ever-lasting novel “Wound of Armenia” (“Verk Hayastani”), the rough and fair copies of his works, the letters got from several famous foreign authors are also remarkable (Abich, Parrot, Peterman etc). The collections of G. Sundukyan, T. Azatyan, Shirvanzade, G. Zohrab, M. Metsarents, H. Tumanyan, Y. Charents and many others are also worthy both in quantity and quality. The manuscripts of the famous classics of Armenian literature H. Tumanian characterize him as a great poet, children’s writer, translator , researcher and national figure. 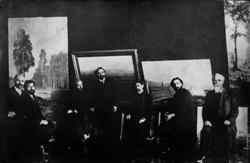 The manuscripts of the “Enemy of Nation” Y. Charents are greatly impressive especially the works filled up for many years and restored after resuscitation . While part of these works has remained under the ground as cinerary ashes of our genius who never had a grave. Arshak Chobanyan’s collection is an inexhaustible depository of Armenian-French literary and cultural collections, where besides different kinds of objects, there are also hundreds of letters written and received by Chobanyan in Armenian, French and other languages. He got letters from such great individuals as A. Daudet, E. Zola, P. Eluard, Lotty, Coppen , Malarme, Ant. Meillet, F.Mistral, R.Rolland, Verhaeren, F. Werfel, A. France, 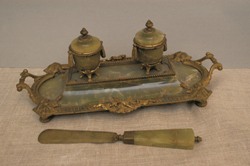 Almost the whole Armenian literature of the given period, the rich handw ritings of armenologists (M.Emin, H.Acharian, St Malkhasyan), various handwritten works concerning different literary and scientific organizations, editorials, educational and cultural institutions as well as collections classified due to their nature and genre are kept in this subsection The works of the students of Dorpat University, the works of Armenian bards (ashugh) collected by the famous ashugh Givani are especially remarkable. 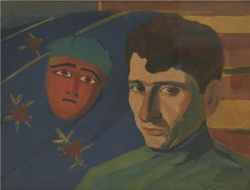 Together with all these the Manuscripts section is considered to be the chronological continuation of Mashtots Matenadaran. 113915 literary-memorial objects are included in the other subsection of the literary collection. Works of Art, private goods, photos, negatives, Stamps, printed memorial works handed over to the museum separately or with the literary collections are preserved in the museum. Kh. Abovyan’s portrait created by German painter Fridrich Lyudvig fon Maydell in 1830 in Dorpat is an exceptional work of fine art. Y. Charents’s portrait created by the famous Armenian artist M. Saryan is a masterpiece immortalizing the great poet and has become a special kind of symbol of present time museum. 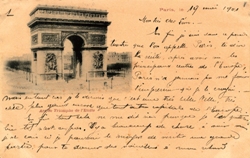 For the history of modern Armenian Bibliographic Art, the designs done by Sharbabchyan, K. Turaturyan are very significant. The collections of Metsarenrs, Intra, Tumanian an others are rich in private furniture and family photos. In this conception the Armenian great playwright G.Sundukyan’s collection is noteworthy and the whole museum can be equipped with objects of the same type.

It is notable that the famous craniologist A.Chagharyan has reconstituted the true bust of the West-Armenian prematurely deceased poet Petros Duryan as far as possible on the base of pieces of his skull. One more memorial object is also notable. It belonged to the other prematurely deceased poet Misak Metsarents , that’s a very expressive and impressive ring presented by his mother. 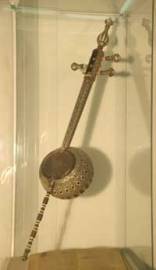 Among the private collections some individual objects belonging to the martyrs of the genocide G.Zohrab, Siamanto, D.Varudzan, R.Sevak have been handed over to the museum and have become sacred relics of those martyrs. Various materials concerning the literary life of the period such as cards, invitation cards, kondaks, calendars, albums and so on and so on are preserved in this subsection.